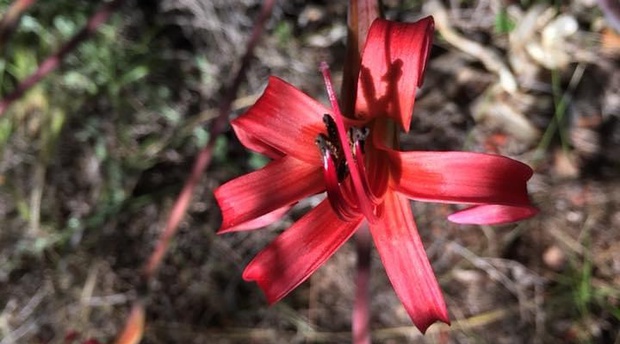 What to do during three weeks of lockdown? At Doornkloof Private Nature Reserve we went looking for some beautiful wild flowers in the mountains.

Very little has changed @Doornkloof since the national Covid-19 lockdown was announced. In fact, we're quietly living our dream life with 500 hectares of mountain paradise to ourselves and great autumn weather in which to enjoy it. We drive to town even less than before and enjoy each other's company even more. Thanks to an Internet connection Buurman is able to work from home, with occasional physical check-ins at the wine estate where he's employed. The absence of guesthouse preparation means I get to catch up on much-neglected admin, work on some creative projects, and raise our short-haired St Bernard pup, Tiny (11 weeks and 14kg). Together, we went on an impromptu mid-week adventure on Tuesday 31 March 2020.

The first time Buurman asked me to walk with him to find the Brunsvigia Josephinae or giant candelabra lily (reusekandelaar in Afrikaans) was in March 2015. He had discovered them by fortunate accident while exploring the ridge up to Voetpadsberg. It was a slog through thick bush and dodder to reach deep into the reserve where these magnificent flowers bloom every year. The Komplotskoppen, the last privately owned land before the mountain becomes government property, have remained unexplored except for Buurman and emeritus professor André Rabie, a previous owner of Doornkloof, who have ventured, separated by several decades, into the northern part of the reserve.

The terrain we traversed, with Komplotskoppen and Voetpadsberg in the background.

The trek has not changed. It's off-trail and you need a guide, preferably one with a large panga. Failing the panga, you need hikers willing to trudge through metres of dodder-strangled undergrowth, hauling their legs over incessant grey-green renosterbos, doing a fair bit of balancing on rock formations, and sliding headlong down the odd shaley slope while screaming in fear. Oh, you get extra points for showing genuine joy at finding yourself ankle-deep in dassiemis (rock hyrax droppings).

We set off around nine and returned at four in the afternoon. It was, thankfully, overcast the whole day. Still we drank litres of water, which we were able to replenish from a fresh mountain pool along the way. Our usual swimming hole was only half full, so we gratefully skipped a swim. I remember vividly how I screamed when I jumped into the icy water in late March last year.

Buurman said he wanted to traipse to a cave he'd never been to, and upward we went. I wished fervently that it would turn out the be home to one of the leopards that roam the reserve. Alas, we found only a few bats and centuries' worth of rock hyrax droppings. The view from the mouth of the cave is spectacular. I could imaging sheltering there, if I ever needed a place where nobody could find me. There are no rock paintings, we checked.

Along the way were rain spider nests:

and other spider nests:

and even a dangerous-looking mushroom:

and its leaves below. The plant flowers first, then the seedhead breaks off and spreads the seed by rolling away from the bulb, and then the leaves come out:

"[Boophone disticha] is... assessed as Declining by the Red List of South African Plants because wild plants are harvested and sold in large quantities at traditional medicine markets, which is causing the the wild population to decrease." (http://pza.sanbi.org/boophone-disticha)

Sliding out of the cave:

The view from that magnificent hidey-hole:

After eating our energy bars in the shade we finally came to the place where Buurman had seen the first josephinae in 2011, but we were once again too late (this tardiness happened last year too). Next year we'll go at the beginning of March. These are the dried seedheads of the giant candelabra lily, proving they did, again, flower this year:

In another spot, closer to the stream, we found one josephinae that had flowered later and was not quite dried up yet. They really are that big:

It has by far the biggest bulb and inflorescence among the geophytes in South Africa.

From seed, plants may take up to 14 years to mature.

They are able to withstand seasonal droughts and very low temperatures in the winter and are also resistant to veld fires.

The specific name josephinae was named in honour of the Empress Josephine, Napoleon's first wife.

Besides its value in ornamental horticulture, the dry bulb tunics are used as a wound dressing. It is known that young Xhosa men use the tunics as plasters after circumcision.

An image from a previous year, when we managed to catch them in full flower: 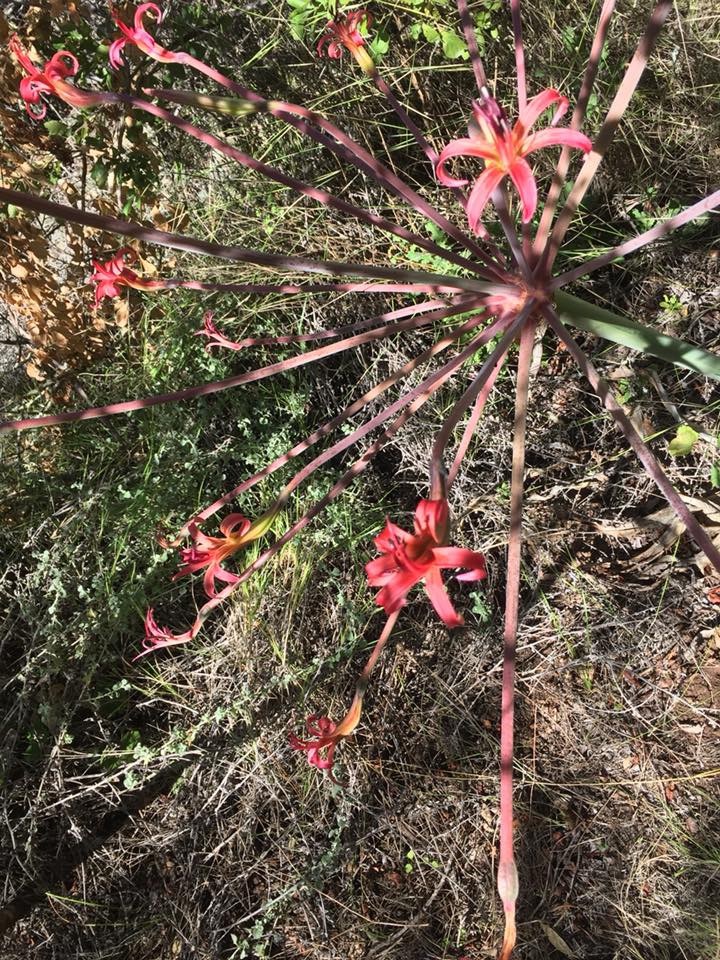 The hill on the right is the way back up on the other side of the kloof, still off-trail and growing steeper the longer you look at it from the bottom: 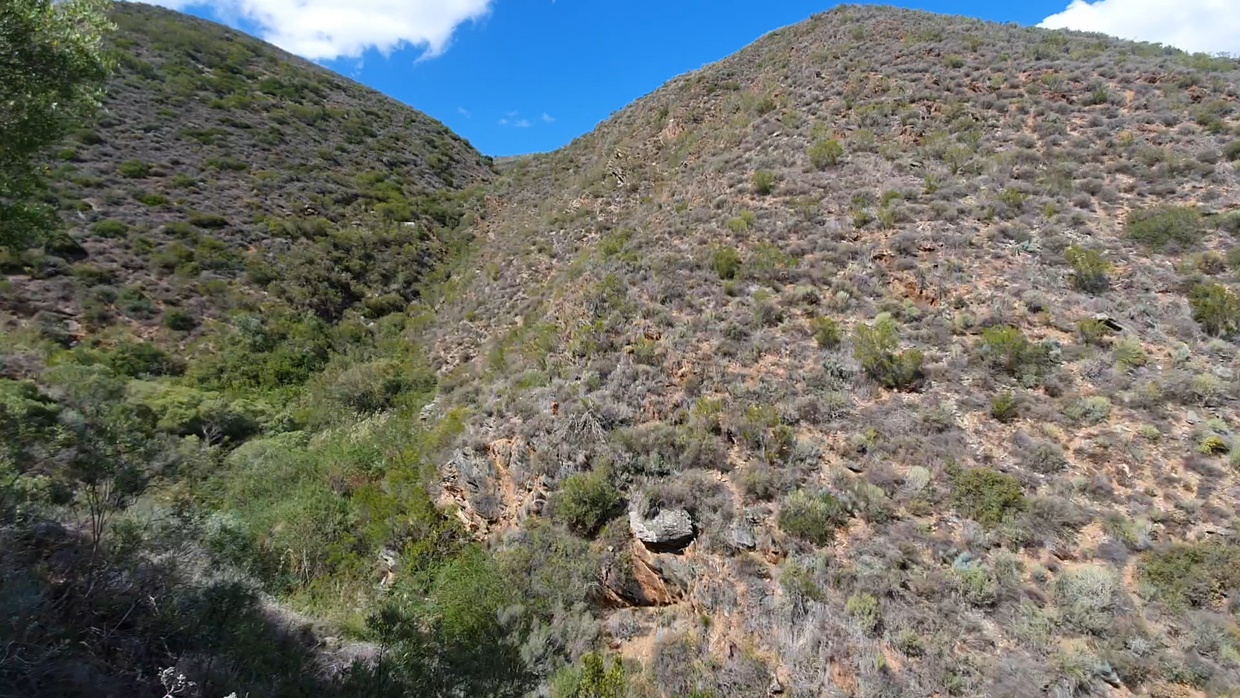 Half way up, looking in the direction of our house, and Villiersdorp in the far distance:

On top of the world:

"In the winter rainfall climate of Namaqualand and the Western Cape, ... Haemanthus has the remarkable habitat of producing stark, brilliant flower heads in autumn, devoid of any foliage, which only appears in winter. This surprising sight has led to H. coccineus being known as the 'April-fool'. (http://pza.sanbi.org/haemanthus)

I just love the apricot colour of this baby Haemanthus:

There's nothing like a clean, hot shower and a carb-laden plate after a day-long adventure in the glorious open air. Gluten-free linguine with mission olives, baby marrows, tuna, and pecorino sauce, topped with white cheddar and, of course, an ice-cold beer to accompany. I'm not ashamed to say we were in bed by seven o'clock that night! 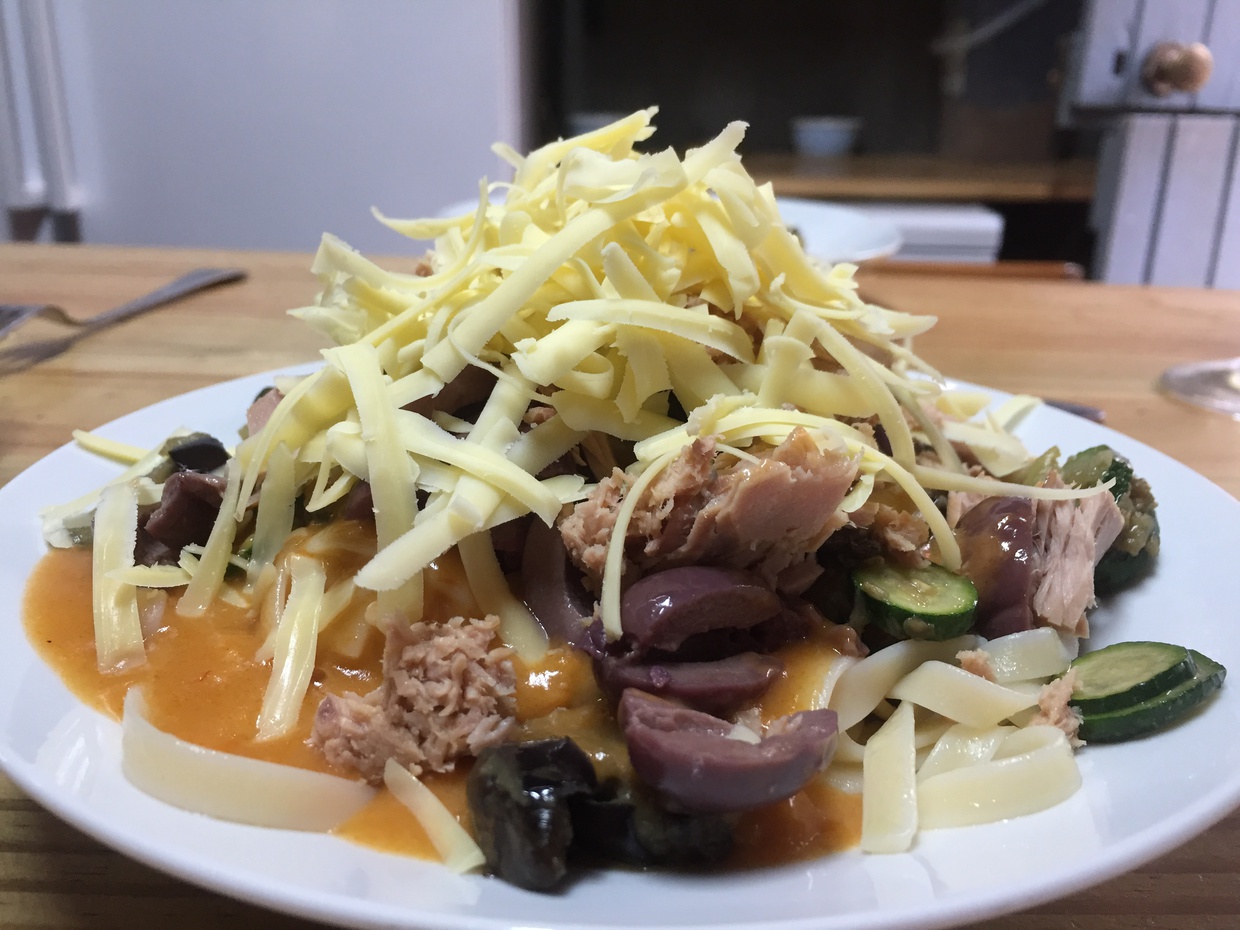 Next year we go again.